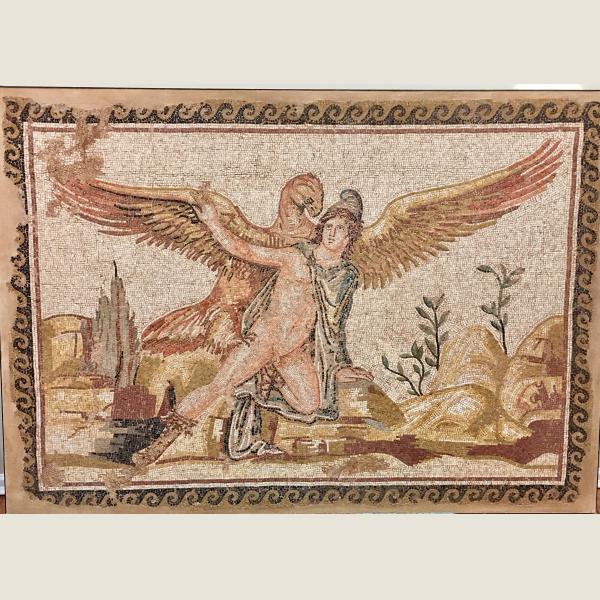 If you don't have a PayPal account, we are happy to accept MasterCard or Visa.
❯ Inquire About This Item
❯ Email or Share This Item
Description
This Exceptional Late Roman Mosaic depicts the abduction of Ganymede by the mighty god Zeus in the form of an Eagle in a country yard where the shepherd Ganymede fed his animals. Plants, tree and rocks are visible. Classic use of ocean wave pattern in border. In Greek mythology, Zeus is the Olympian god of the sky and thunder, the king of all gods and men, consequently the chief figure. Zeus was a promiscuous god. Bearing the shape of different animals, he had numerous love affairs with nymphs and mortals.

Leda myth: disguised as a swan, Zeus seduced Leda, Queen of Sparta, who slept with her husband King Tyndareus on the same night. Leda bore twin girls - Helen, daughter of Zeus, and Clytemnestra, daughter of Tyndareus, and the Polydeuces (twin brothers) Pollux, demi-god child of Zeus, and Castor, son of Tyndareus. (We think that Zeus must have slept with Leda on more than one occasion to generate so many births; then again he was a god!!)

Europa myth: Zeus was enamored of Europa, mother of King Minos of Crete and of high lineage herself. In an effort to ravish her, he transformed himself into a tame white bull and mixed in Europa’s father’s herd. When Europa saw the wonderful bull she caressed his flanks and eventually got onto his back. Zeus took that opportunity, ran to the sea and swam with her to the island of Crete. (The Iliad provides us earliest literary reference to this tale, dating to the 8th century BCE.)

Ganymede and the Eagle: Ganymede was described by Homer in the Iliad as the most beautiful of mortals. “The immortals, awestruck by his beauty” snatch him “to bear the cup of Zeus.” His homeland was Troy. Once again, Zeus could not restrain himself. Ganymede was abducted by Zeus from Mount Ida near Troy in Phrygia and taken to Olympus. In the Iliad, Zeus is said to have compensated Ganymede’s father Tros, King of Dardania, with the gift of fine horses, delivered by the messenger god Hermes. Tros was consoled that his son was now immortal and would be the cupbearer of the gods, a position of much distinction. In Olympus, Zeus granted him eternal youth and immortality.

(”Whether the eagle is understood to be Zeus or not varies according to the literary sources. Pliny’s wording suggests that the eagle acted on the command of Zeus… It is in Ovid’s Metamorphoses that the chief Olympian takes the form of an eagle to steal away the Trojan boy for whom he burns with love. Virgil envisions the royal boy with a javelin and cites Mount Ida as the place from which he is carried aloft. Nothing in the Paphian scene indicates that the eagle is, in fact, Zeus, but such associations were surely rife in the viewer’s mind. Very few of the Ganymede representations dwell on the erotic aspects of the tale: instead they dramatize a mythological event.” )

Curiously, the theme of Ganymede serving wine to Zeus in his eagle shape was employed in dining scenes in luxurious settings when extravagant meals were to be served. Some Ganymede mosaics were designed to be obscured while the food was served and then unveiled when the serious drinking and entertainment was to start.
(Ref: “Antioch, Lost Ancient City, Christine Kondoleon, Princeton University Press, 2000

Mosaic is mounted on honeycomb, an expensive process that allows it to weigh one third of a conventional treatment in cement.